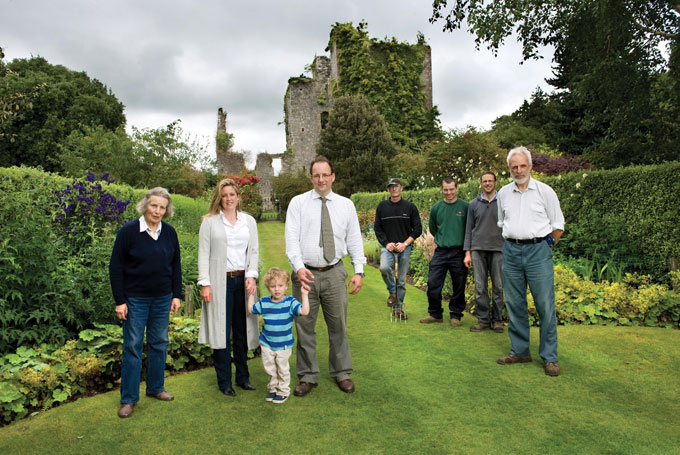 John MacArthur of that Ilk
Head Gardener
John has been Head Gardener at Castle Kennedy Gardens since 1988 and is the Hereditary Chief of Clan Arthur. He has particularly enjoyed the challenge of looking after the Rhododendron and Woodland Plant Collection and extending it to new areas of the Gardens.

John started gardening in 1970 at a training apprenticeship with the National Trust. After receiving a Diploma at the Threave School of Practical Gardening, John was awarded a scholarship to Longwood Gardens in Pennsylvania, USA. On his return to Scotland, John worked at Lochalsh Woodland Garden Balmacara before coming to Castle Kennedy Gardens.

Tommy Lawson
Assistant Gardener
Tommy has worked at Stair Estates since 1969, joining us when he was 16 years old. Originally he started work as a joiner in the Building Department before moving to the Gardening Team in 1971. Tommy is from Stranraer and enjoys every aspect of gardening at Castle Kennedy Gardens.

James Henry
Part-time Gardener / General Maintenance
Prior to starting work at Stair Estates in 2011 James spent 16 ½ years in the Scots Guards rising from Private Soldier to Sergeant. He completed operational tours of Iraq, Afghanistan and N. Ireland and Ceremonial duty in London. The highlight of James’s time in the Army was being stationed at Balmoral for 3 months during Her Majesty’s residence, and even managing to get to dance with the Queen. James is from Stranraer, is married and has 3 children.

Sam Milby
Seasonal Gardener
Sam was born in Catterick garrison and spent his early years in Germany as his father was in the armed forces before returning to Glenluce nearby. After studying horticulture and agriculture at Barony College, Sam worked for A.S.M. Gardening maintaining commercial and private properties before working seasonally at Castle Kennedy Gardens since 2010.

Davina
Dowager Countess of Stair
Davina has been devoted to the Gardens since coming to Lochinch as a young bride in 1960 and is still very much involved, in particular with the Walled Garden. Davina has recently created a new garden which is open by arrangement to visitors in the summer months. ‘I have lived in this lovely place for nearly 55 years. It has been very rewarding reviving several areas of Castle Kennedy Gardens which had become overgrown and developing the Walled Garden.’

Jamie and Emily
14th Earl and Countess of Stair
In the past few years Jamie and Emily have taken over the responsibility for managing the Gardens. Recent projects include commissioning a detailed history of the Gardens, a new conservation management plan, the restoration of some of the sculptured earthworks and the planting of new Wollemi Pine and Dicksonia antartica (Tree Fern) Avenues. They and their children can often be seen in the Gardens taking an active role in the day to day running of this wondrous creation.

We wish you all a very happy Easter, full of sunsh

Transform your garden with some of our beautiful p

It's going to be a colourful Easter at Castle Kenn

Have you had a chance to make it along yet? Make a

Have you tried our Hummingbird Cake yet? It’s i

Have you joined in on our Easter Egg Trail yet? Co

We are open and the Easter holidays are here! Wh

“When all at once I saw a crowd, A host, of gold

Magnolia campbellii can take 30 years to flower an

We are enjoying one of the best flowering springs

As we get ready to open Castle Kennedy Garden’s

Just remember, during the winter, far beneath the

Wishing you a very happy Christmas from Castle Ken

It's hard to beat the beauty of a white Christmas.

The Winter Solstice is here and the dark winter sk

Cold dark nights are the perfect time to start pla

We hope you're wrapping up warm and enjoying the S

Come and see us for the last day of our Easter Egg Trail tomorrow, Sunday 24th April. Only £1.50 per trail, reduced from £3.00! We still have Easter Eggs for all those who complete the trail.We've had a great couple of weeks and have loved seeing everyone enjoying themselves in the Gardens. #happyeaster #castlekennedygardens #easteregghun ... See MoreSee Less

We wish you all a very happy Easter, full of sunshine and good times. It’s been a wonderful first few weeks of the Gardens being open. On the wider estate our new born lambs have arrived in time for Easter and are enjoying the wonderful mild weather. ... See MoreSee Less

Transform your garden with some of our beautiful plants this Easter. Browse our range of stunning rhododendrons for inspiration. All our plants are home-grown or sourced from trusted Scottish suppliers.Castle Kennedy Gardens are open daily, 10am - 5pm. #plantsforsale #rhododendrons #scotlandgardens #castlekennedygardens ... See MoreSee Less