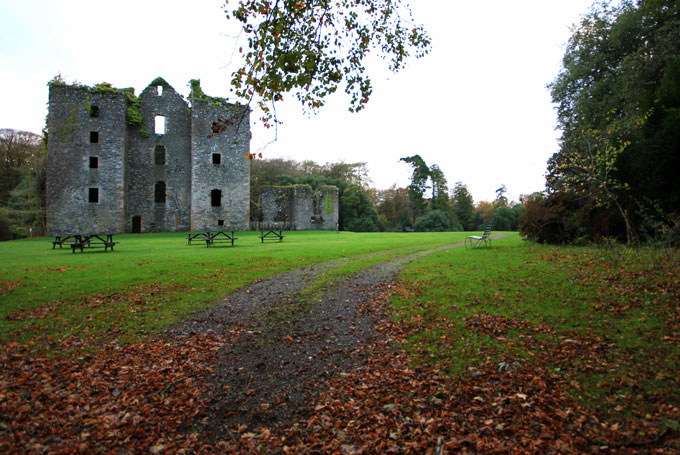 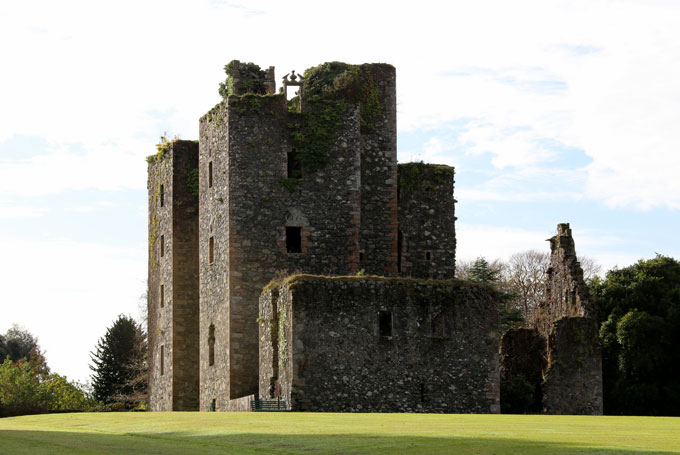 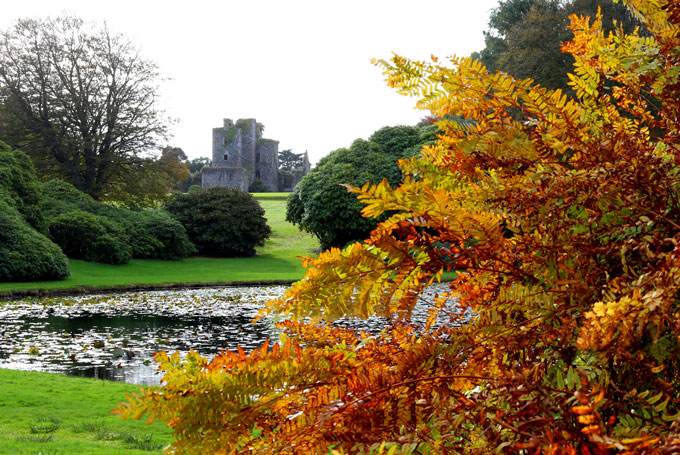 Castle Kennedy was first described as the ‘novum castrum de Inche’ (the new castle of Inch) in a charter of 1605. John, Lord Kennedy was appointed keeper by James IV of Scotland in 1482, and the building was later rebuilt c1600 by John Kennedy, 5th Earl of Cassilis.

In 1674 the house and estate were sold to John Dalrymple, later the first Viscount of Stair, whose eldest son was created Earl of Stair in 1704. The 2nd Earl, who was a soldier and politician, inherited in 1707.

In 1716 the Castle was accidentally gutted by fire and has subsequently never been inhabited.

Upon Saturday last the house of Castle Kennedy was burnt, of which I have no account of the way it was done, but only that the maid put out a fire in the drawing room for airing the room, and went to bed after she had put out the fire. However, in the middle of the night it broke out and burnt all, so they had difficulty to make their own escape, and could save nothing except my son’s own picture and two more. I know he will be concerned, because Castle Kennedy was the favourite house he had in this country; but we must all submit to the providence of God and acknowledge His Justice that orders all things well. And I desire you may transmit this letter to him and observe his orders.”

The Countess-dowager announcing the burning of the castle to Lord Stair’s Agent in London.

The building is an unusual combination of a tower-house design with a classical theme. The tower house provides it with its compact form and height, and its symmetry is classical. The castle is built from rubble and has a Y plan.

The house comprises a five storeyed central block with flanking turrets and towers, laid out symmetrically except for an off-centre entrance in the east wall. The lowest level contained a cellar and a kitchen. Above were the upper rooms, which led to the bedrooms located in the two, six storey, towers. The attic rooms and windows of the wings had fine pediment dormer windows. One of these can be seen on the North wing’s outer side.

The north-west tower has a vaulted basement and a ground floor gun-hole covering the door. Gun holes can also be found in the western faces of each of the main towers.

Tower houses of the 16th Century were quite numerous in South West Scotland. They were intended to offer security against short-lived raids by neighbours but very few were intended to withstand canon fire of a lengthy blockade.

Vaulted basements helped to make the towers fireproof (!) and aided the structural stability of the buildings with walls sometimes a metre or so thick. Wide mouthed gun ports typically appear in cellars and small round gun loops are sometimes higher up. Otherwise towers could only be actively defended from the battlements.

We are excited to support local author Margaret An

Morning world! Although we didn't receive a heavie